Arjumand Banu Begum, also known as Mumtaz Mahal was the Mughal Empress and chief wife of 5th Muhal Emperor Shah Jahan. The love of Mumtaz Mahal and Shah Jahan is immortal in the history of World.

She was born 6th April 1594 and was married to Prince Khurram later become 5th Mughal Emperors known as Shah Jahan Name. Arjumand Banu Begam and Shah Jahan marriage took place in April 1612 in Agra. The marriage of Shah Jahan and Mumtaz Mahal proved to be very successful. Arjumand Banu Begam captivated Shah Jahan’s heart even more than Nur Jahan had done to that of Jahangir. Arjumand Banu Begum shared Shah Jahan’s delights and distresses in full measure and acted like a gave spouse during her better half’s departure from the Deccan to Orissa, Bengal and Bihar over the span of his defiance to his father. She bore 14 out of her husband’s 18 children and remained his friend and inseparable companion till her death.

Arjumand Banu Begum was promoted as the Cheif wife of Shah Jahan was given the title of ‘Mumtaz Mahal”. She died on June 17, 1631, while Shah Jahan was leading a mission in the Dakhin.

“Arjumand Banu Begum was promoted as the Cheif queen of Emperor Shah Jahan was given the title of ‘Mumtaz Mahal”.

Arjumand Banu Begum was a profoundly instructed and achieved lady. She had the regular excellence of a high request. She had extraordinary normal insight and a delicate heart. She took to get a kick out of doing demonstrations of compassionate foundation and was especially circumspect and supportive to helpless widows and vagrants and the troubled. Mumtaz Mahal was a devout and strict woman, given to petitions, diets, and different observances charged by Islam. There was not really any Mughal sovereign in Indian history that was so beyond all doubt adored by her better half. The renowned Taj Mahal at Agra which covers her natural remaining parts is the noblest landmark of affection and loyalty.

Arjumand Banu Begum was also a very noticeable figure in the Mughal court. She was given the responsibility and the highest honor of keeping the seal of the land – the Mehr Uzaz. Mumtaz was one learned princess who was well versed in languages such as Arabic and Persian. The nature and humbleness of Arjumand Banu Begum, Mumtaz Mahal was quite famous throughout Agra as the nobles and other officials were very fond of her. This made the pact of marriage between Shah Jahan and Mumtaz Mahal an easy affair as Jahangir, father of Shah Jahan readily agreed.

Mumtaz Mahal although was engaged to Shah Jahan in 1607, was the second wife of the emperor because in between 1607 to 1612, Shah Jahan was married to his first wife due to political reasons. Mumtaz Mahal died on 17 June 1631 while giving birth to her 14th child.

The Taj Mahal was worked by Emperor Shah Jahan (r.1628-58) for his beloved empress Arjumand Banu Begum upon her passing in 1631. Built of World’s best marble, quarried at Makrana close to Jaipur, it required 22 years to construct including 20,000 specialists from everywhere Asia. The burial chamber and going with structures are coordinated around a nursery isolated into four sections by raised walkways with water channels at their focuses.

The pietra dura was finished with great many imported valuable and semi-valuable stones organized in flower plans that adorn the outside and inside of the structure. The domed white marble catacomb remains on a plinth with tightening minarets on each corner. Its amicable extents and perfect craftsmanship have made the Taj Mahal one of the marvels of the world. Arjumand Banu Begum’s cenotaph is situated in the focal office of the sepulcher and is shrouded in pietra dura work, as can be found in this drawing. The highest point of her cenotaph is finished with calligraphy.

“The wife of the Mughal Emperor Shah jahan, Arjumand Banu Begum died on 17 June, 1631 in burhanpur.”

Throughout these years of intrigue and campaign Arjumand remained at her husband’s side, becoming one of his chief advisers and confidantes. They had 14 children together in 19 years.

At the hour of her passing Shah Jahan was on crusade and, obviously, the vigorously pregnant Arjumand had went with him. On 17 June, at Burhanpur, following a 30-hour work, Arjumand fostered a lethal post pregnancy drain and kicked the bucket. She was covered in a walled garden on the banks of the River Tapti.

Shah Jahan was devastated and went into secluded mourning for a year, emerging, according to a contemporary chronicler, stooped and white-haired. Determined to provide a fitting memorial for his wife, the emperor had her body exhumed and brought to Agra where building soon began on her mausoleum. 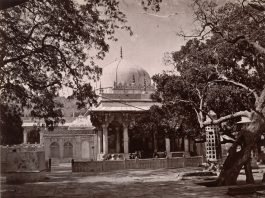 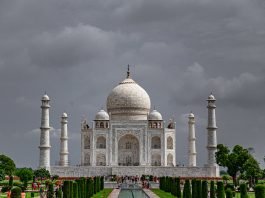 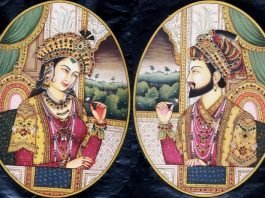